John Dixon was born 30th January 1949 in Mill Hill, Blackburn, Lancashire. Growing up in the 1950’s, he experienced the changing social and economic culture which heralded a new era of innovative and exciting ideas to a young post-war generation.

Still fascinated by the old ways and its teachings, John took inspiration from his grandfather, Joseph Dixon, who encouraged him to step out into the green and open landscape around Blackburn, thereby escaping the clog, clatter and Smokey chimneys of the post-industrial mill town in which they lived. 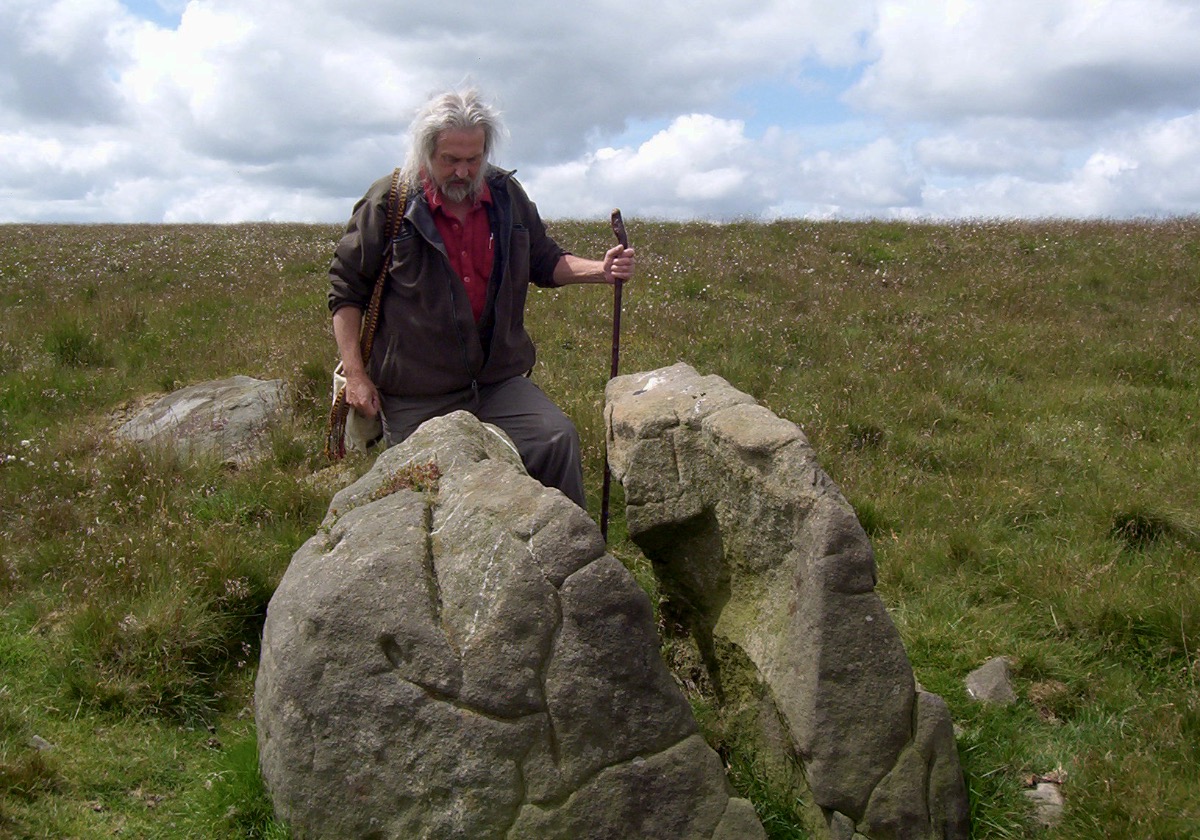 “On a Sunday he would walk up to Tockholes talking to everyone he met along the way, and I would follow him.’“If you can’t keep up, I’m not waiting for you’ and he meant it. With grandad, I learned how to walk and how to converse with all and sundry”

In his early years, John forged strong friendships with John Mitchell and the Lancashire poet David Hazel. Many a malarkey was to be had during those years and each shared a love of the freedom when striding out over the yellow hills of Blackburn overlooking the vast expanse of the Ribble valley, the west coast of Lancashire and southerly, towards the mountains of Wales.

In his teens, John’s family moved to Billington, just outside of the historical village of Whalley, with its ruined medieval abbey and the river Ribble flowing through towns such as Clitheroe and the Roman village of Ribchester. It was here that his fascination with history first developed.

After leaving school and serving his apprenticeship in electrical engineering, John moved back to Blackburn and worked in many of the textile mills and factories. His engineering skills took him to London and Germany, where the average wage was double that of home.

Wild and rebellious, John had begun to embrace the 1960’s culture of radical ideas. He developed a philosophical way of viewing the world’s ideologies and, gifted with a charismatic and somewhat eccentric personality, his voice rose above the crowd.

His appearance and persona were also unconventional. His future mother-in-law commented, “When John came back from London in 1969, I peered through the curtains and said to my husband: By ‘eck Frank, who’s that long haired, bearded tramp knocking at our door?”

At 23, John married Christine Flannery and had two children; Wayne and Maxine. As he approached his 30's John turned to academia and achieved a degree in sociology and economics and went onto train as a teacher and taught in the surrounding schools during the 1980’s and early 90’s. 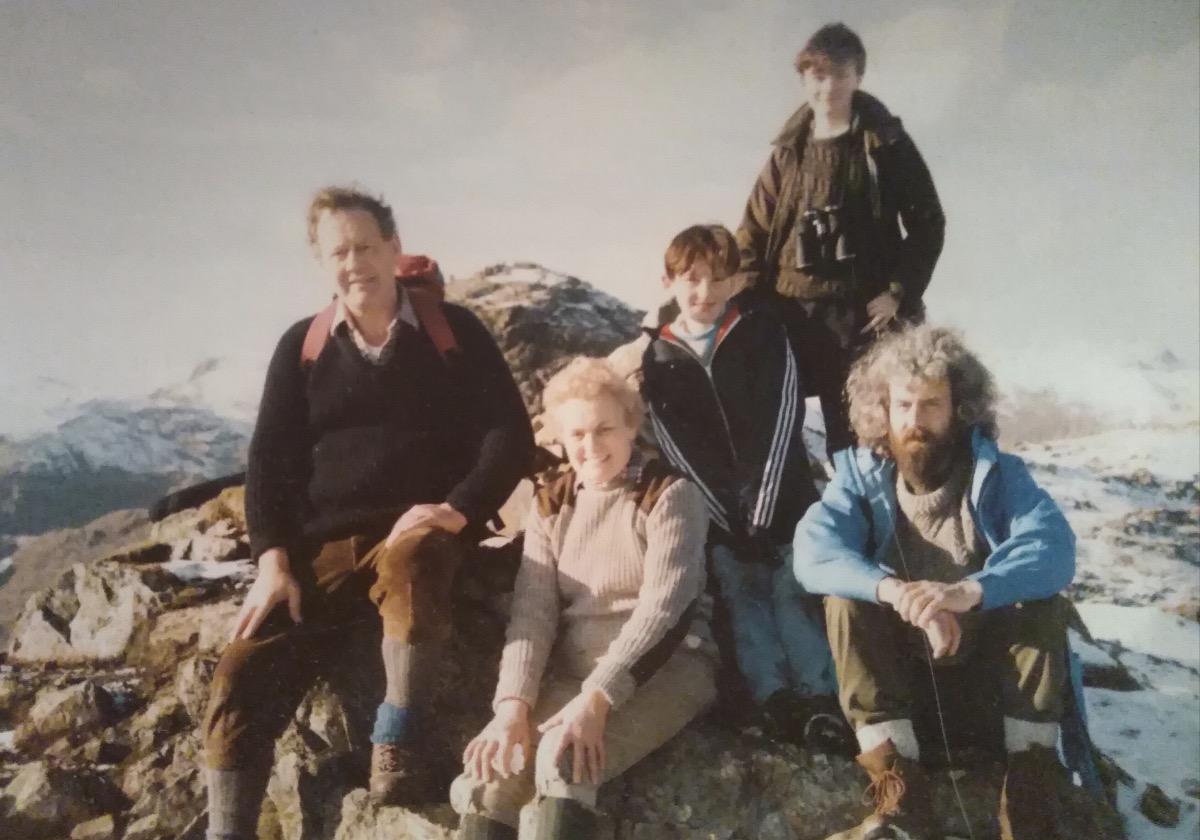 A Family Affair
John with his Parents & Children

Combining his passion for walking and his enthusiasm for sharing knowledge, he set up a weekly historical walking group in Whalley. This gradually developed into producing pamphlets and the subsequent publication of his writing on the Ribble Valley and Forest of Bowland with Dalesman and Carnegie Books.

However, his restless nature led him to spending some years travelling to the Greek island of Crete where he explored the mountain ranges and gorges, happily adapting to the southern Mediterranean lifestyle.

Unconventional as ever, he felt more at home inhabiting remote caves and seeking the wilder parts of life. It was here that he met the leading Finnish Artist, Janna Jarvinen. Her incredible attention to detail captured the essence of John’s writing and after moving to Britain, they started work on their ‘Brigantia’ series.

Sadly, this partnership came to a premature end with the death of Jaana in 1989. The loss was devastating to John and during that grief, he became distracted from his work. 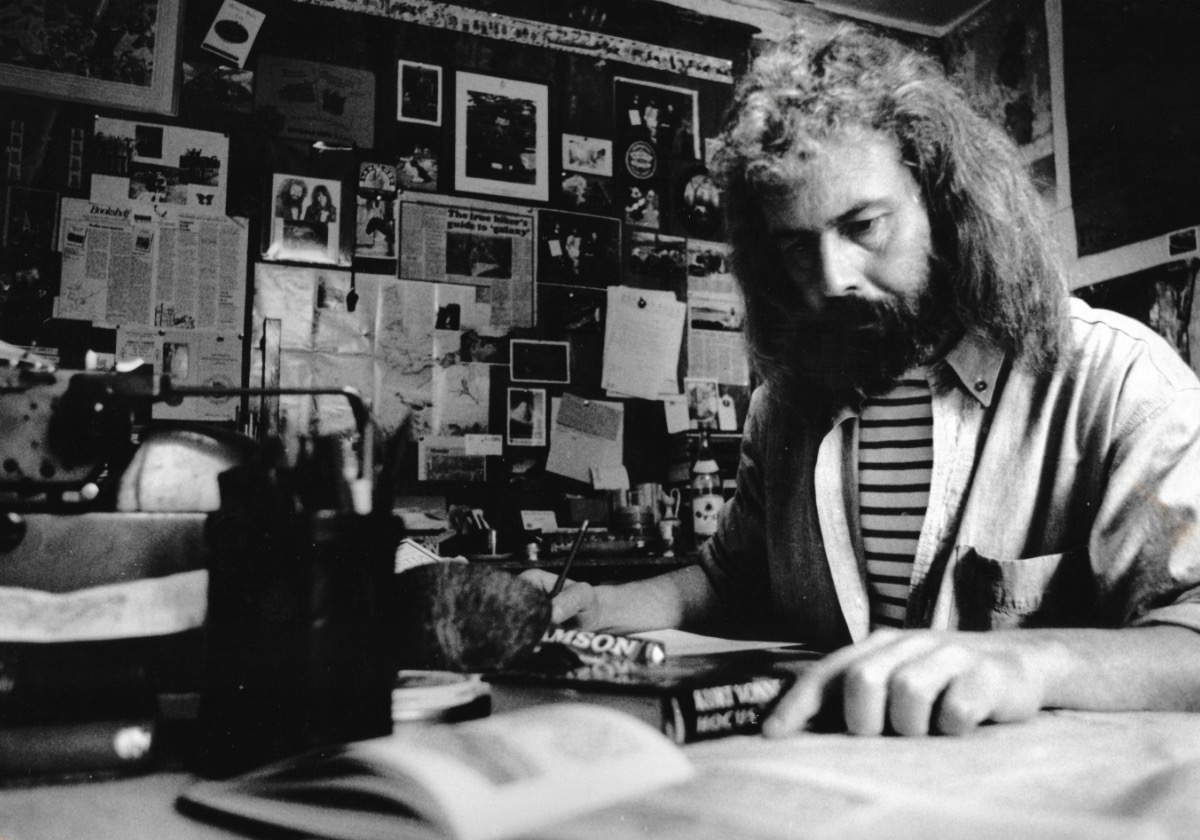 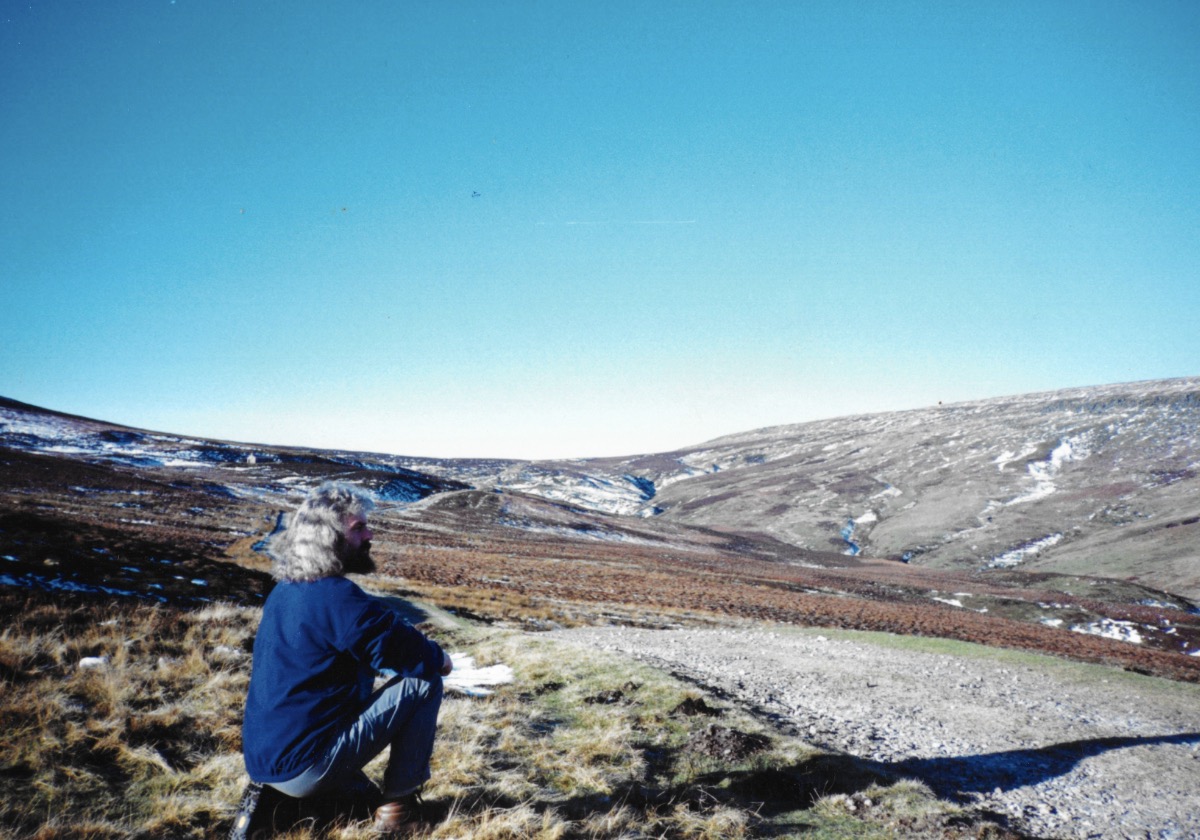 John looking out over the Bowland Landscape

In the following years, John returned to Crete and it was here he met his second wife Bente, a Norwegian national. They set up home on the remote Island of Gavdos and with a population of only 35 people who barley spoke English, he thrived in the Zorba-like environment, being able to live an alternate life that pre dated his own. When his son Wayne joined them for six months, he observed John’s developing theatrical character.

When later John and Bente moved to Norway, John embraced his love of Viking history and relished its historical culture. However, he did not adapt well to the long summer days and winter nights and eventually, they settled in Clitheroe. It was here that he commissioned the remarkably talented blacksmith, Iain Hogg, to create an iron gate which replicated a Norwegian Viking ship, which is still widely admired at his former house on Lowergate, Clitheroe.

In 2000 John was hospitalised twice after suffering a mental breakdown and was diagnosed with Bi Polar disorder. During the next 3 years his condition was fragile. Eventually, supported by family and friends, he was encouraged back into walking and used the natural landscape to improve his physical and mental health leading, in 2003, to his first book in 10 years; Dunsop Bridge Bowland Forest. This was later followed by a series of three family walking guides.

Following his recovery and return to writing, his thirst for knowledge and spiritual awareness grew. His son encouraged him to visit Konya in Turkey. What started as a three-week visit became a three month stay when he was introduced to the practice of Sufism. John embraced its mystical aspects and wrote his first book on inner spiritualism - Sufic Odyssey.

“A walk along an inward path (tarikat) to gain Certitude of Insight over and above Belief in that which is Truth. With fine views of the Divine Mind, the Ultimate Source of Goodness, Well-being and Happiness”.

Through this practice, he became spiritually stronger and more able to cope with his bi polar. This gave him the confidence to explore more sacred parts of the world and ultimately, different faiths, cultures and history. 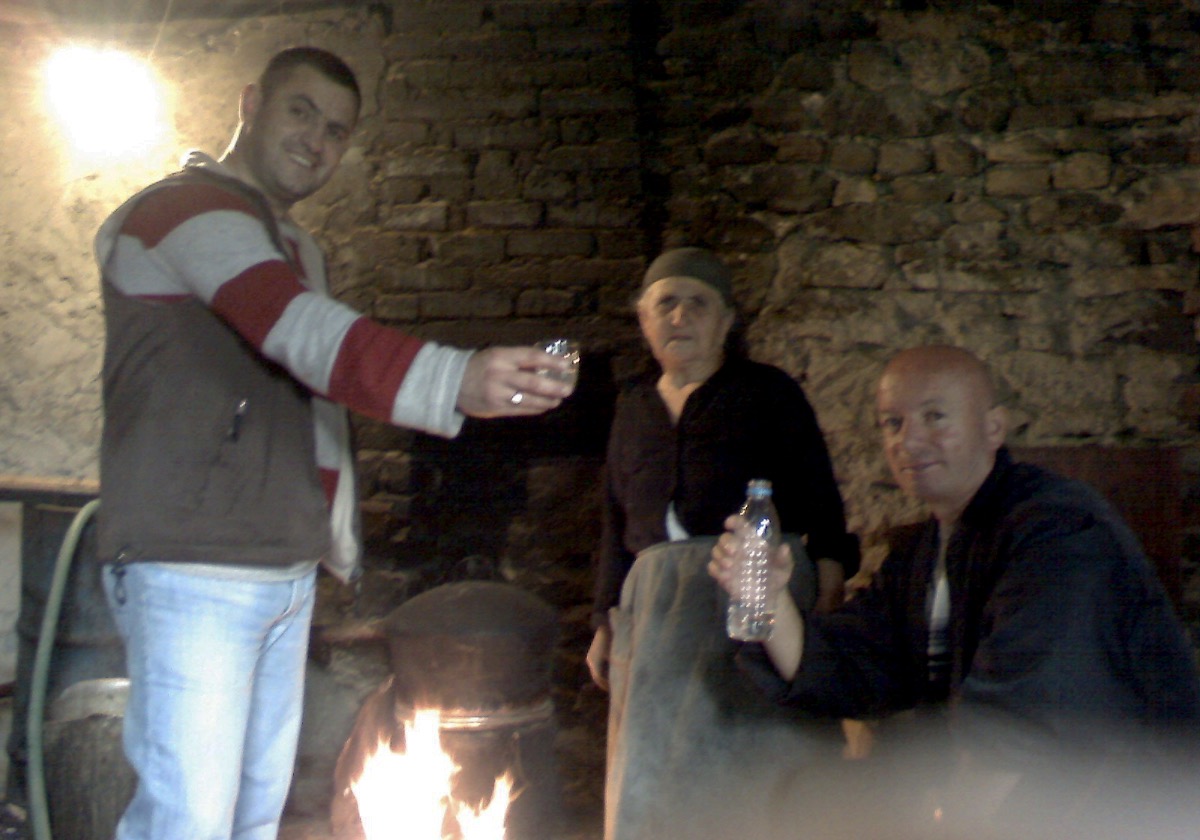 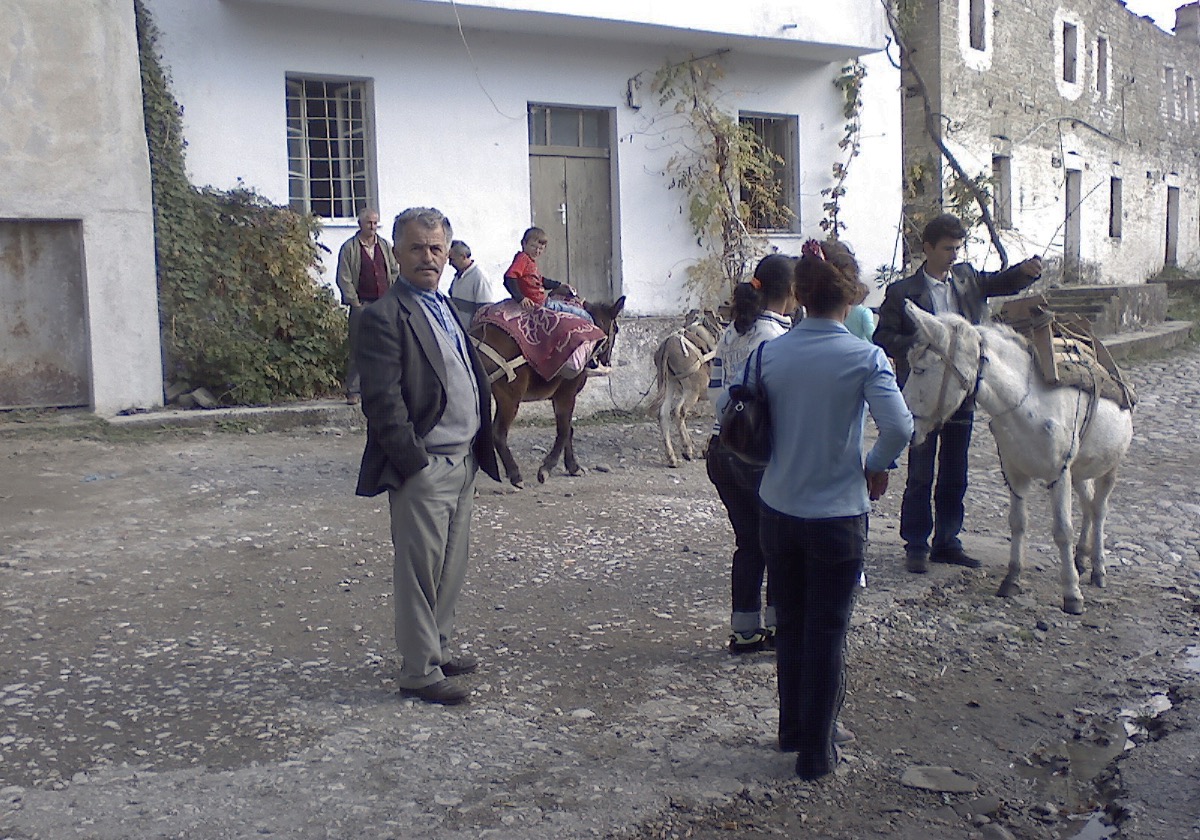 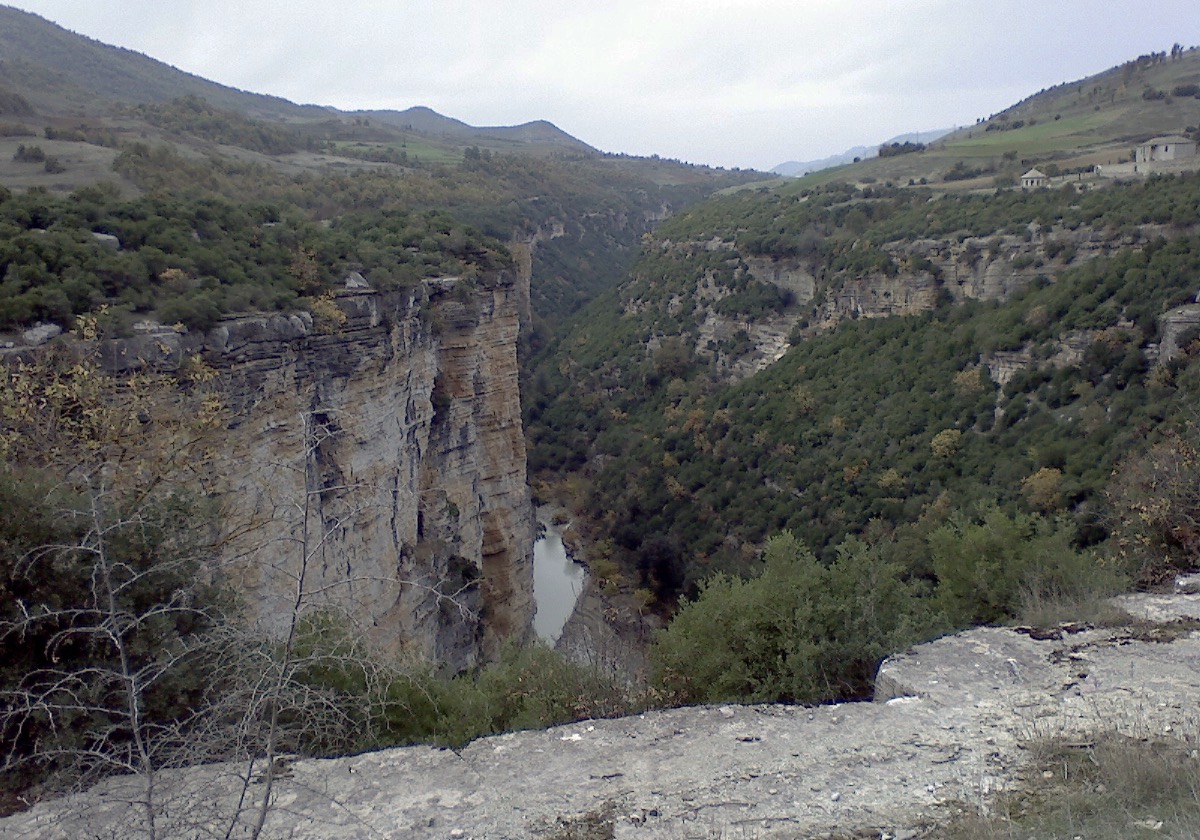 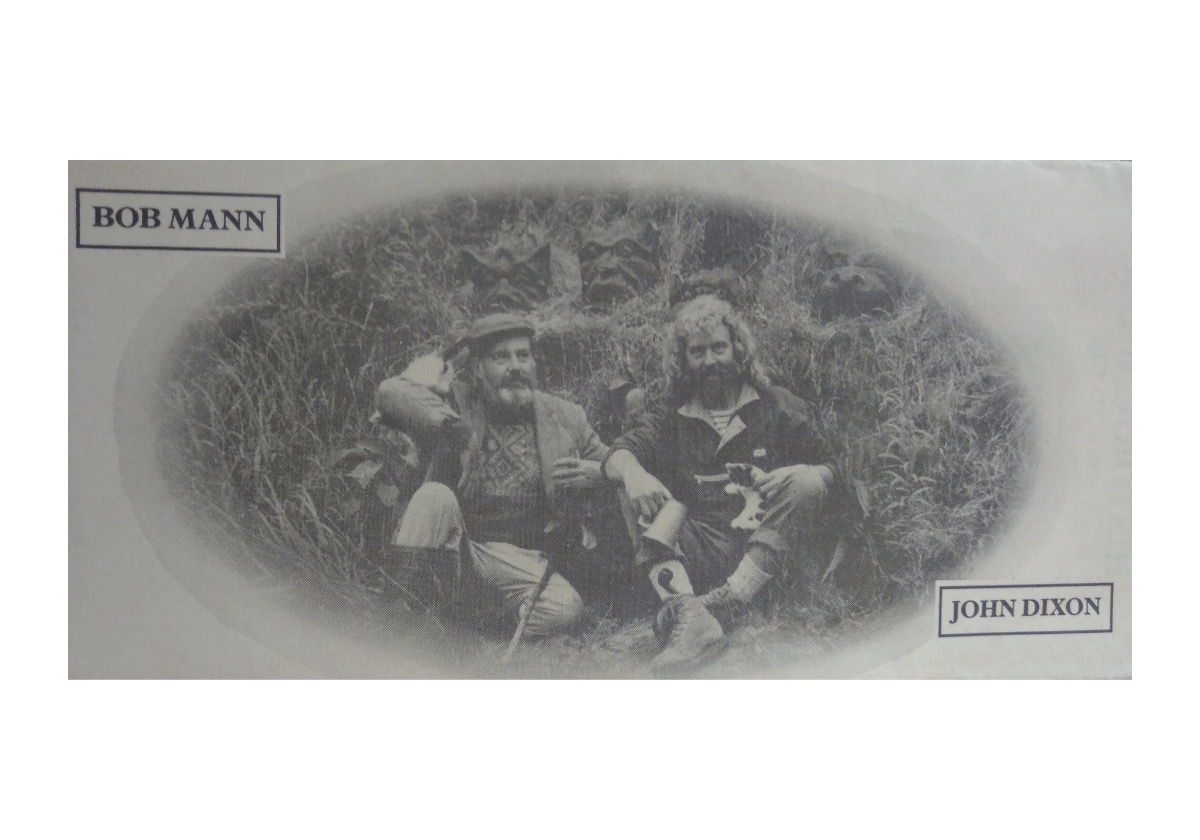 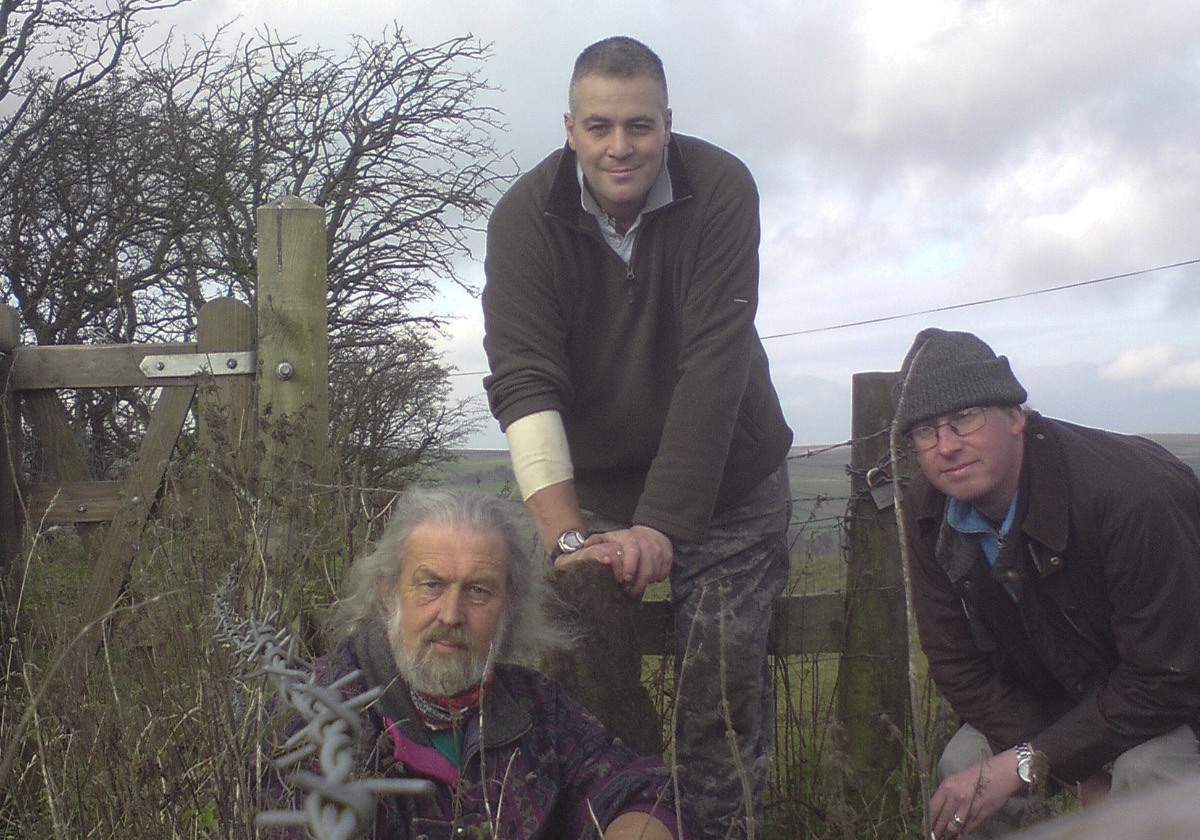 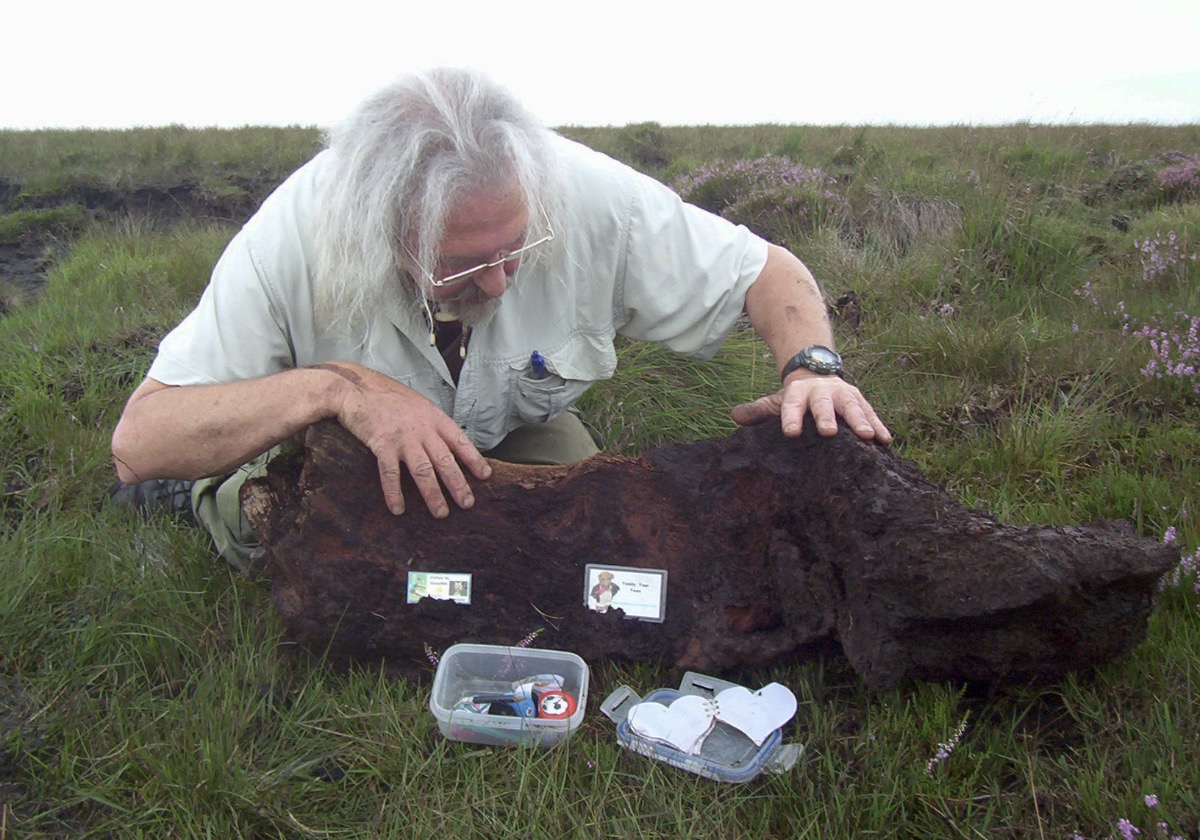 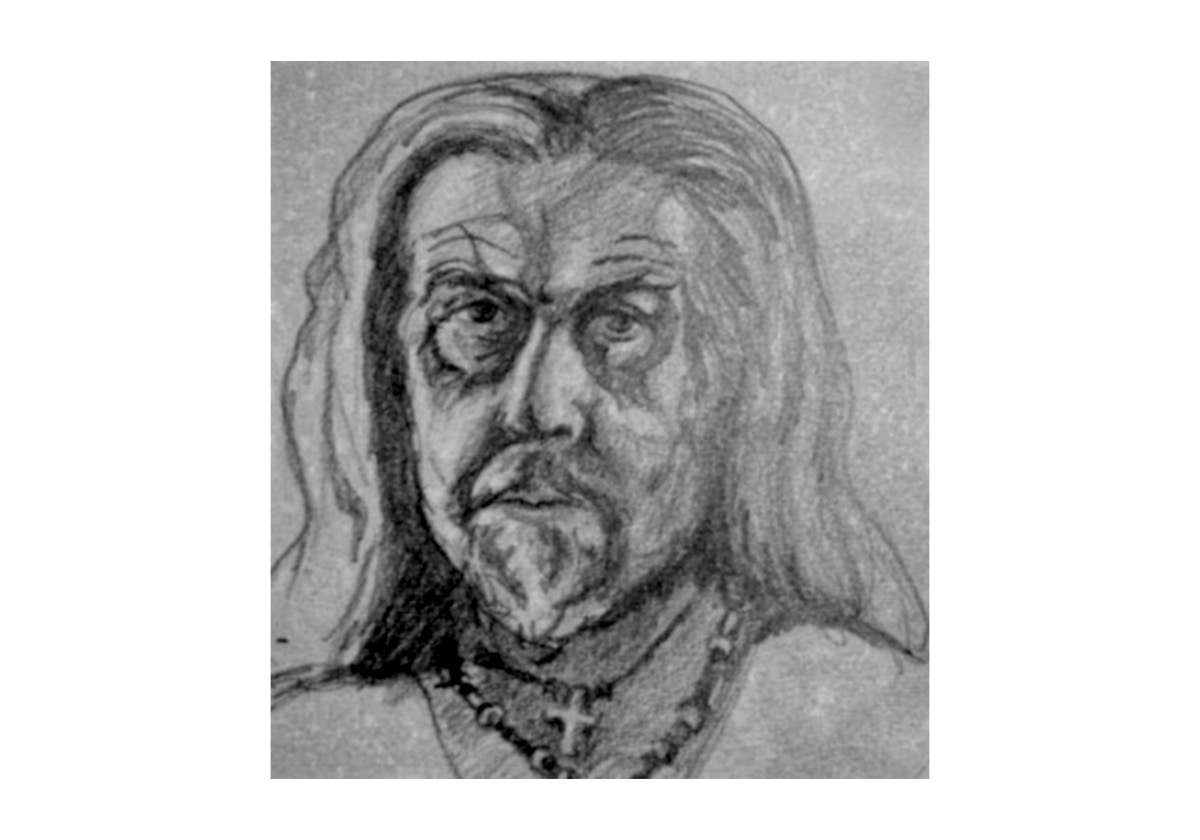 Sketch of John by Tony Begolo 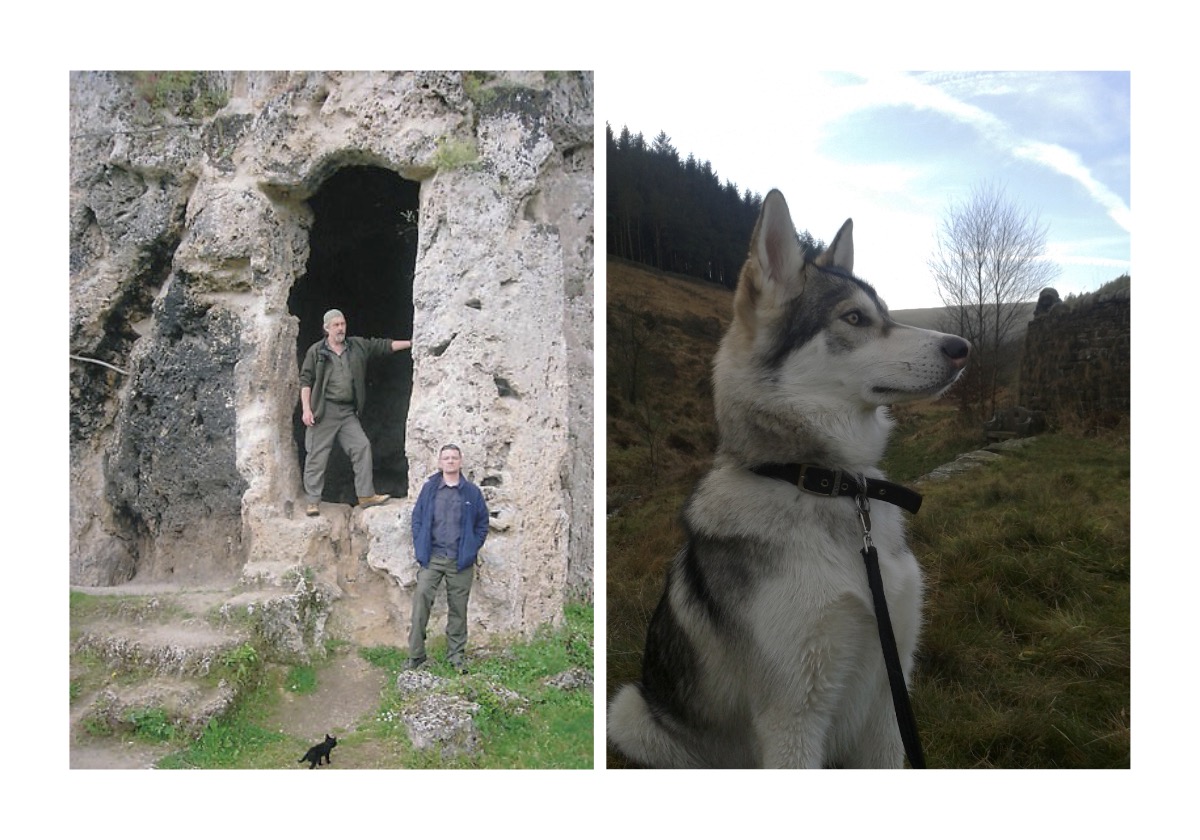 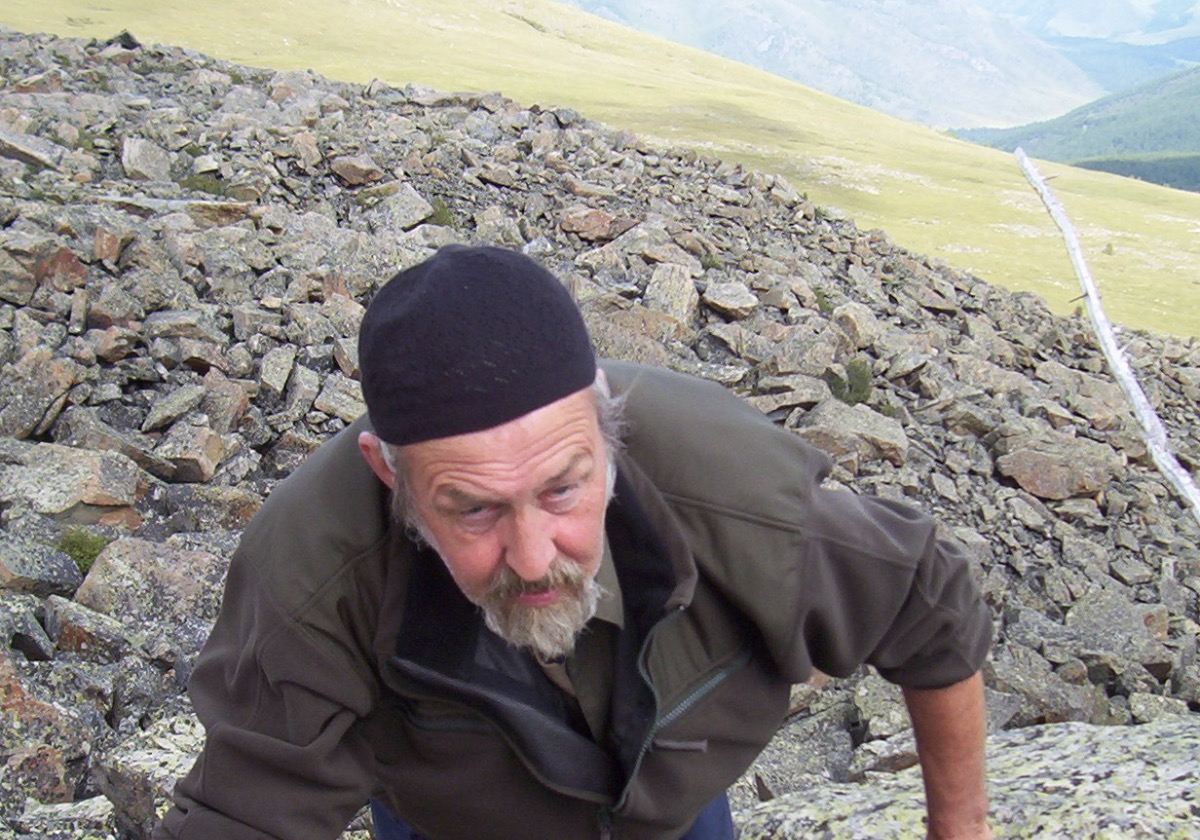 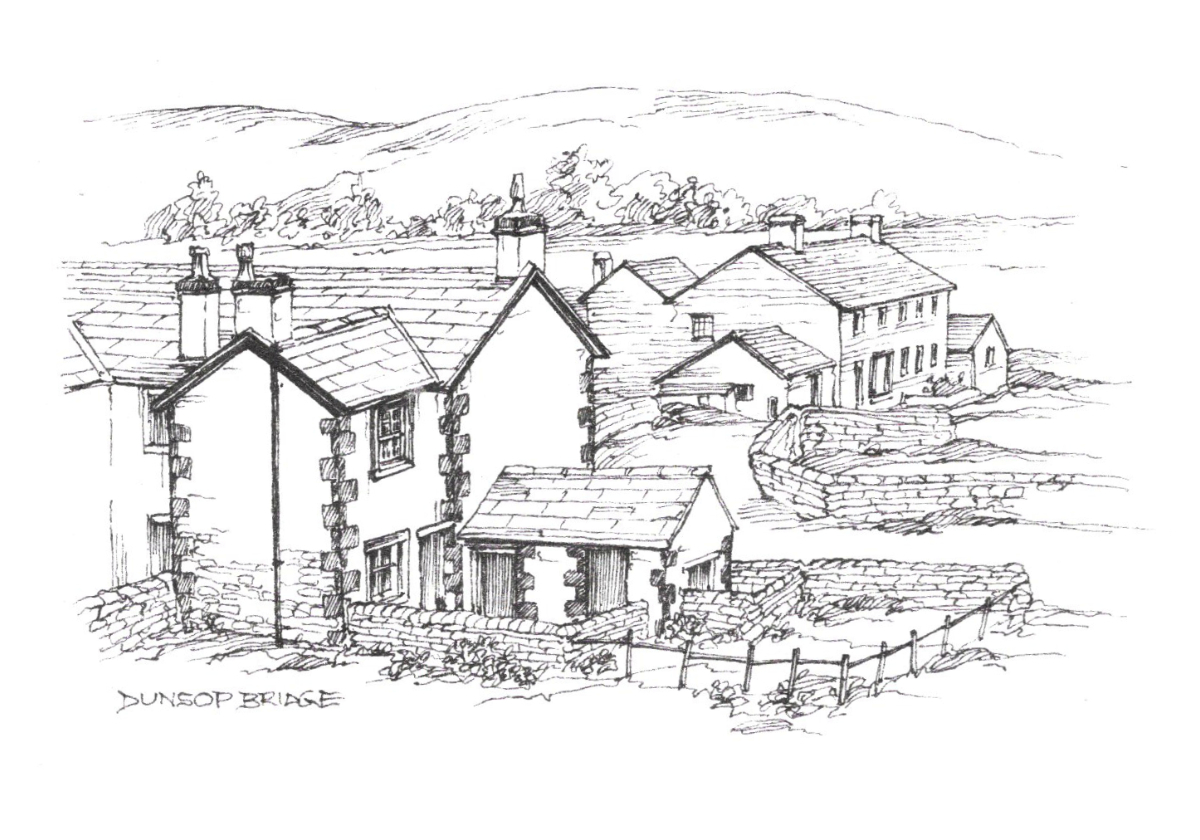 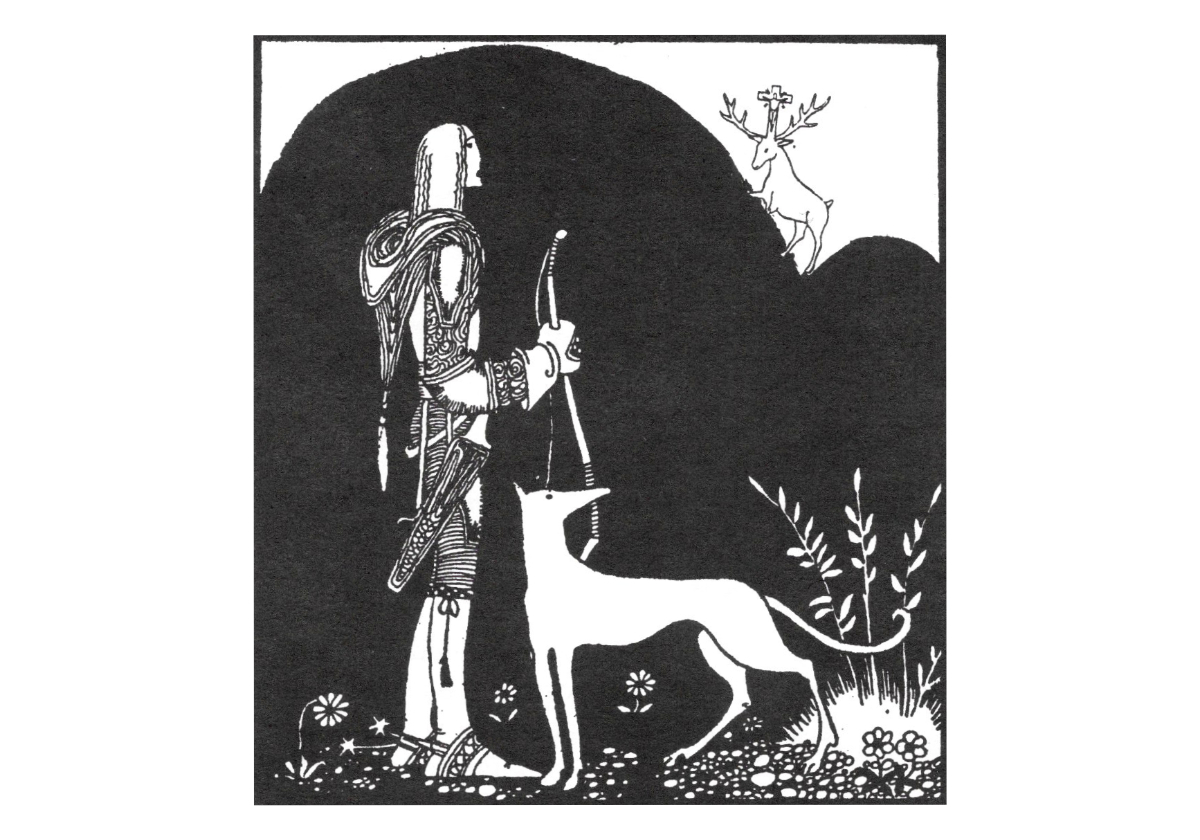 St. Hubert & The Stag
Illustration of a stained-glass window 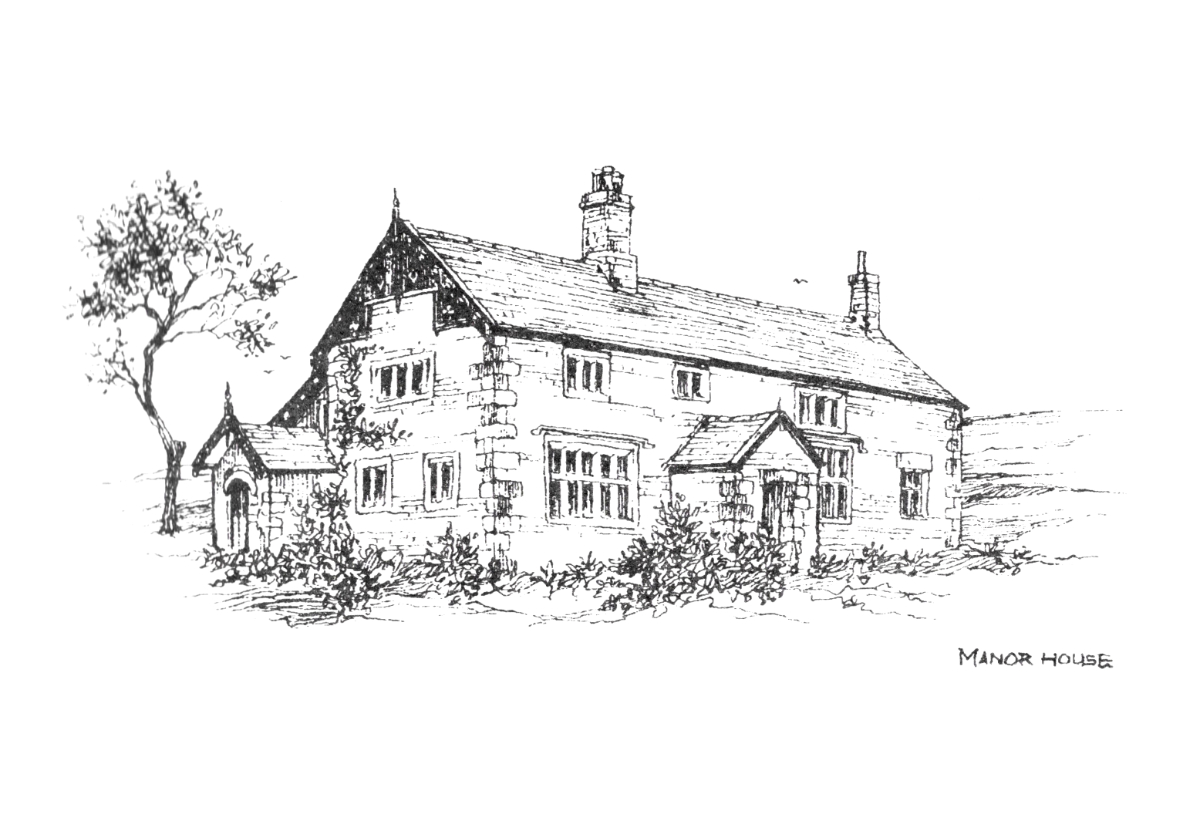 He travelled to remote parts of Albania, Macedonia, Russia and Siberia. Travelling by horse and on foot, he explored the mysterious and sacred mountain of Belukha, (known in Altai folklore to be the gateway to mystical Shambhala), and the Ukok Plateau; the land of kurgans of the ancient Pazryk peoples, 300 miles to the south-east on the borders of Kazakhstan, China and Mongolia. This experience had a tremendous impact on John, bringing a deeper awareness of the natural world and humanity.

It was during these last years that John decided to look for inspiration back home on his Lancastrian door step.

Despite many books and references previously written about Pendle hill, it was John who first identified that Pendle was not just a stand-alone hill, but part of a 24-mile geological massif. This inspired him to write the first extensively researched book about the Pendle massif itself. Weaving threads of mythic storytelling and poetry, John wove his own spiritual self into each page, guiding the reader throughout the 30 rambles.

Pendle, A Mythic Landscape, was to be his final piece of work. He died at home from a heart attack on the 20th September 2012 age 63. 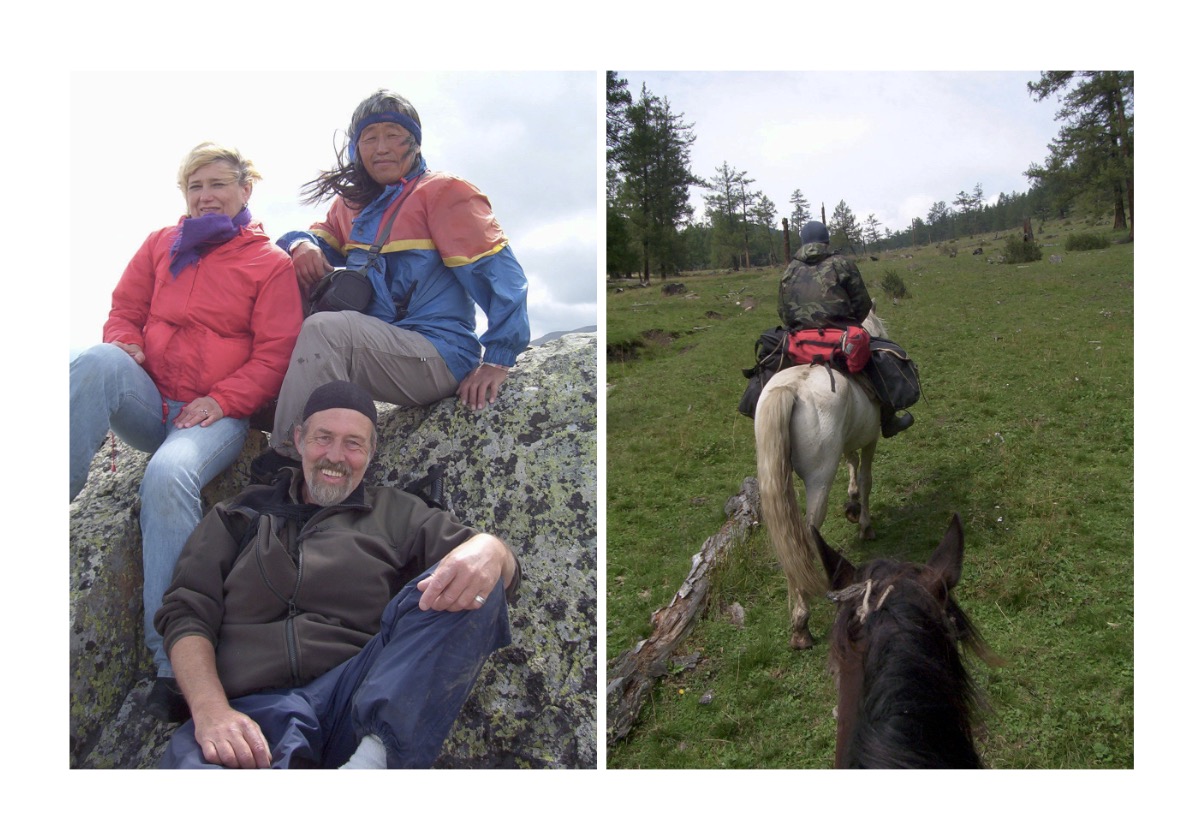 John left this life with a lasting legacy. His books documented the historical foot paths that may have been lost to development or neglect and through this fearless campaigning, he maintained the public right of way for walkers in the country side. His sense of humour and imaginative style of writing both enabled and encouraged others to venture to the great outdoors and use the landscape to discover a sense of belonging in nature and a true meaning and feeling for Lancashire’s past.

Since his passing in 2012 Blackburn, with Darwen council, have hosted an annual walk in his memory, led by writer Nick Burton. John’s family continue to distribute his work and are currently in the process of publishing Pendle Mythic Landscape in a set of three volumes.

In 2016 his son Wayne, in memory of his Father, embarked on a life time ambition to walk the coast of Britain, accompanied by John’s Northern Inuit dog Koda. Wayne is raising money and awareness for the mental health charity Mind as well as litter picking along the entire coast line! 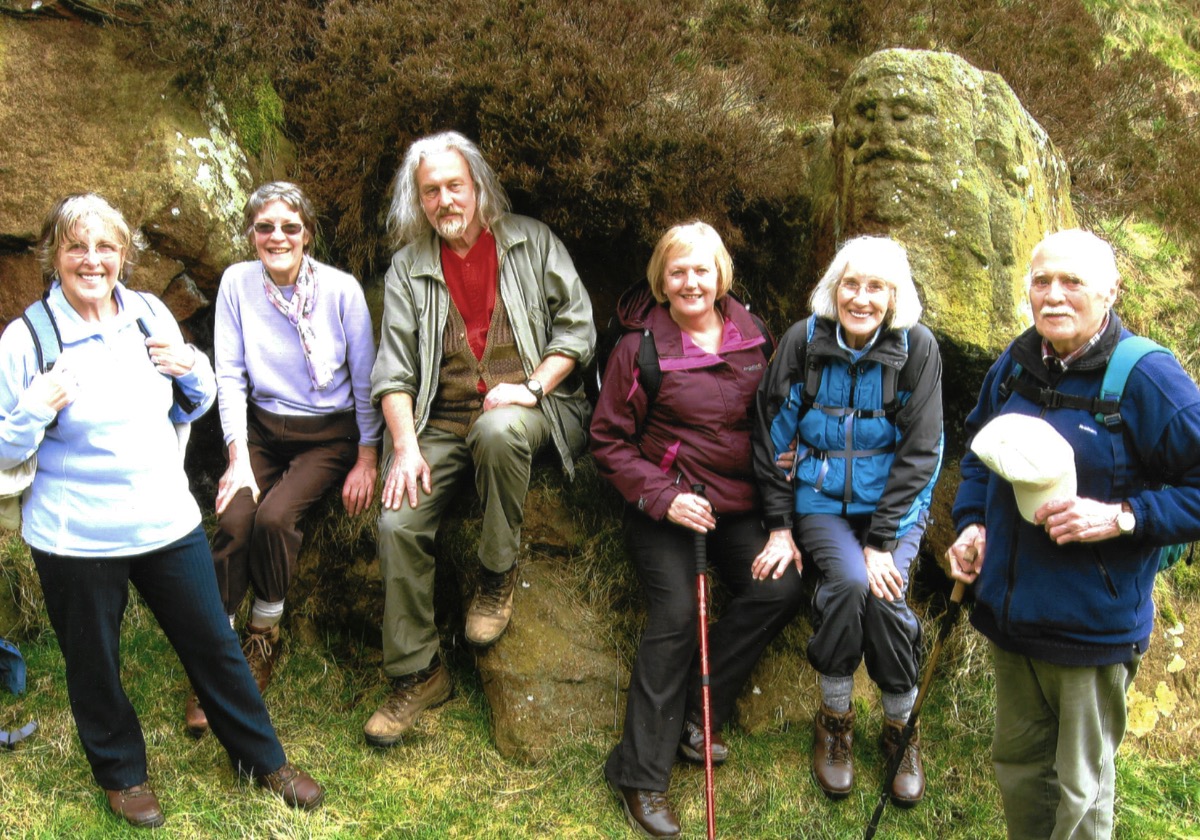 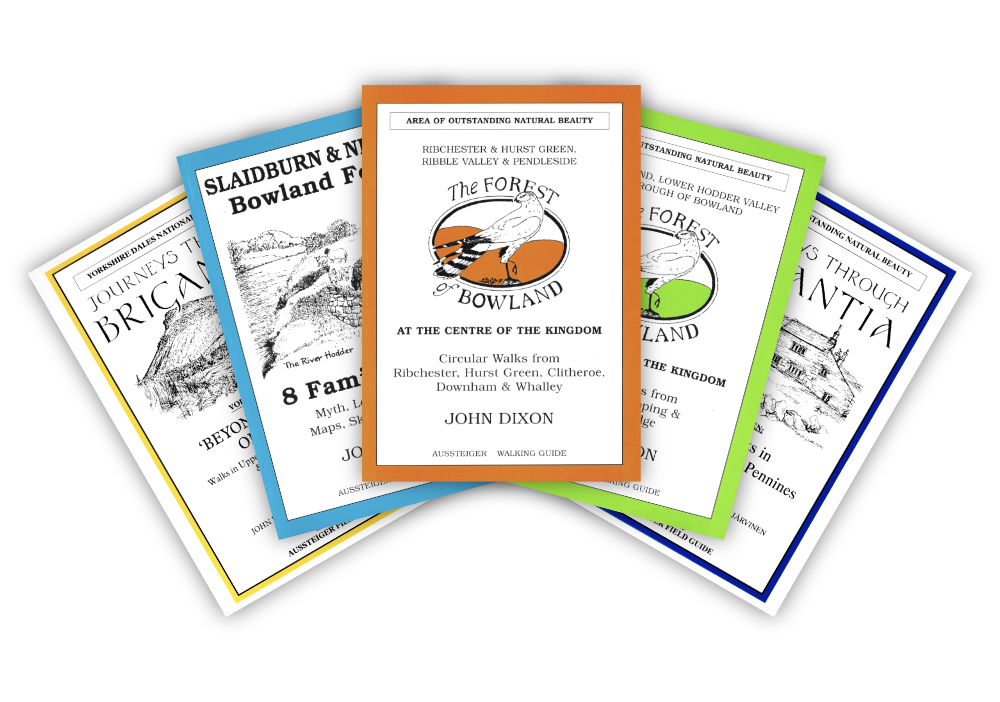